And by adventure I mean this wonderful blog.

I still have many stories to tell, but I’ll tell them to my little baby for now. And once she has grown up some, I’ll return.

My sincere apologies if I don’t respond to your comments. If it’s an urgent enquiry, you can always email me at the address provided on this blog.

If you are a bride about to get married in Mumbai, you probably understand the need for a website that will tell you where to look for the perfect gown and the right venue, among other things. Bombay Brides shares the stories of the beautiful Christian brides who have planned their wedding or plan to celebrate their wedding in Mumbai.

Brides from every Christian community – East Indian, Mangalorean, Protestant, Anglo Indian, Goan, etc. and from every part of Mumbai – Vasai, Thane, Mumbai proper, Vashi, South Bombay are featured on Bombay Brides. As well, there is a section dedicated to curating the wedding photos from the old days and another towards interviewing wedding vendors like photographers, flower artists, etc.

Have a look at the beautiful Bombay Brides blog I created to know how you can be a Bombay Bride or a bridal vendor.

A long time ago, I had written about two books very pertinent to the East Indian community of Mumbai – Trace and the Salsette Vasai East Indian Cook Book I. Due to public demand, these books ran out of print very quickly.

This year, September saw the republication of the second part to the Late Dorothy Rodrigues’ cook book as well as Trace by the Late Teddie Rodrigues. More information on purchasing both these books can be found on the website I created under the moniker Bombay East Indian Books with help from Teddie and Dorothy’s daughter, Cassia who is married to my cousin brother.

Do visit the website to know more about this remarkable East Indian couple from Vile Parle and their contribution to documenting the East Indian way of life and cuisine.

General confusion over our origins is something every East Indian is intimately familiar with.

For a community with roots planted firmly in Bombay, it is difficult explaining people that we are not – as the name points out – from the East of India. We are not (well, most of us at least aren’t) descendants of the employees of the East India Company – British or otherwise. 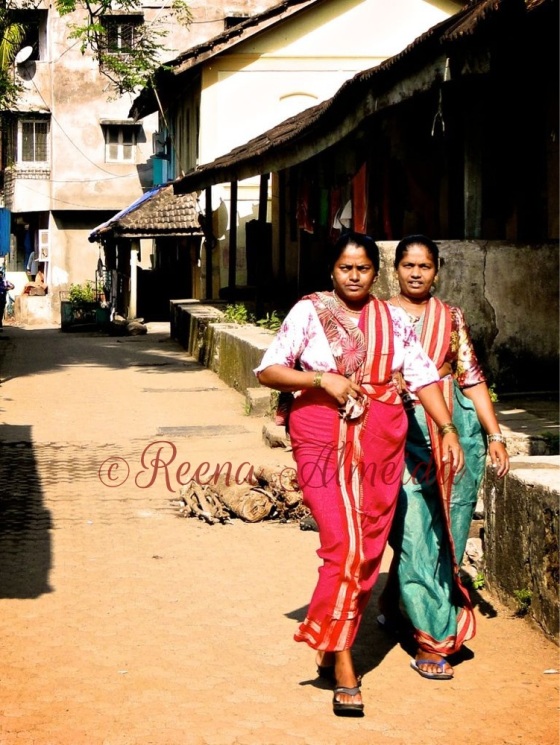 The East Indians of Mumbai have descended from those native residents of Bombay (of course, it wasn’t known as Bombay back then, and nor were we known as East Indians either) who converted to Christianity – back when St. Bartholomew himself visited the Western coast of India (2nd Century AD).

Our Lady of the Sea Church, Uttan

It is to the Portuguese however, who came much later, that we owe much of our traditions, architectural styles, cuisine and various dialects. It was the Portuguese after all, who gathered the Christians already thriving in the area and were responsible for ensuring the continued existence of parishes and churches.

Had the British not been such a dominating influence on Indian politics and society, the East Indians would have probably continued using the moniker Portuguese Christians. However, to differentiate them from the other Catholic communities who had flocked to the city, they assumed the name ‘East Indian’.

Over the years, the East Indians have kept alive the traditions that were carried out before Roman Catholicism and Latin took over our religion and language. Coastal Konkan foods like sanna (soft rice flatbread), bombil (Bombay Duck) fry and rural Maharashtrian foods like dried mango fish curry and cucumber cake, to name a few, find their way on to our tables.

The class system exists in our community and while it no longer holds as much power over modern East Indian society, it does help differentiate the various dialects, cultural traditions, customs and even the kind of masalas and pickles we make! 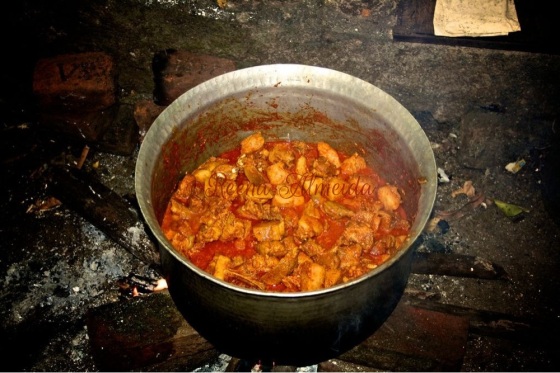 Marathi however, is considered the mother tongue of our people and for written communication we use the Official Marathi prevalent in the state of Maharashtra. The dialects however, differ from region-to-region.

For instance, in Vasai (Bassein) alone, there are the Valkar, Vaadval, Kaado, Koli, Paanmaali, Maankar, etc. – each with their own dialect and with subtle but definite differences in wedding customs, cuisine and jewellery among other things.

I shall use my own people (Valkar) and my husband’s (Vaadval) as an illustration of this difference.

{The East Indian Kolis, to mention another group, have a more lilting way of speaking and the sibilant sounds are more stressed.} 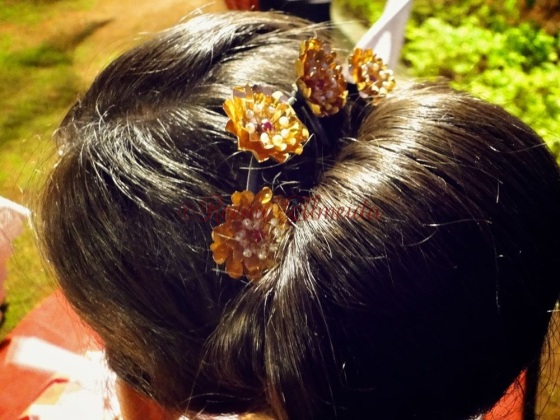 Aanjelanchi Kaadi – a traditional headpiece made from gold foil, pearls and coral

It is taboo these days to get into details about the class divisions, and rightly so. But just to illustrate a point, back in the days of the British, the Valkars tended to pursue clerical/office jobs while the Vaadvals were landowners and farmers – these occupational details further shaping the dialects and certain customs.

Our homes were all built the same way though – cow dung-floors, tiled roofs, wooden beams supporting the roof, a proper hearth in the kitchen, a verandah with enough space for a wooden swing and a pit or two in the floor to pound spices. These homes are rare now and most are uninhabitable, except for ones in the deepest gaothans (villages).

Today, the East Indians are just one of the many minorities living in their home state and largely forgotten by the rest of Mumbai. 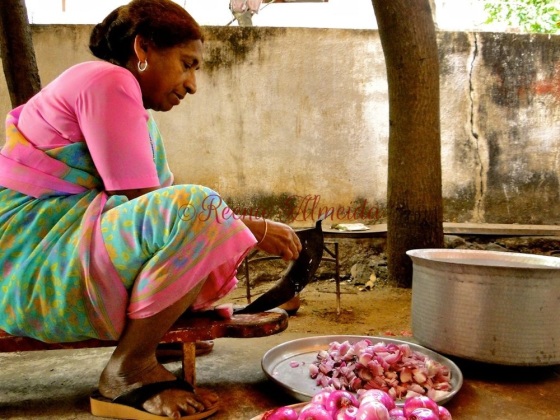 The traditional morlis are still in use for slicing onion, grating coconuts and cleaning fish among other things.

But we are present in Vasai, Uttan, Gorai, Mazagaon, Mahim, Vakola, Kalina, Marol, Chakala, Bandra, Parel, Parla, in every ‘Galyan saakli sonyaachi‘ sung, in the beats of the ghumat at weddings, in piping hot, soft foogyas, in spicy pork indyaal (vindaloo) made using the East Indian Indyaal Masala, in the famous Bottle Masala, in the weave of vivid, bright lugdas and in a lot of Fernandes’, Pereiras, Mirandas, Almeidas, Sequeiras, Rebellos, Lopes’, Furtados, D’mellos, Gonsalves’ and D’souzas.

These last names may be shared by a lot of Goans and Mangaloreans as well, but look closer and you just may be able to tell an East Indian from the other Christian Indian ethnicities.

Note: While I am no scholar on East Indian lore, I have tried my best to present a legitimate summary of my community from everything I’ve learned growing up as a girl in Vasai. If there are any points you feel must be included or corrected, I invite you to email me at almeidareena at gmail dot com. I would appreciate your inputs towards presenting a more accurate picture of the East Indian community of Bombay.

Terencia Kinny, a student of architecture has been working for a while now on her Design and Research thesis on East Indians. An East Indian herself, she contacted me a couple of months back inquiring about Teddy Rodrigues book on East Indian history and culture – Trace.

The reason she was seeking the book caught my attention and I couldn’t be happier to speak about it here.

Mark out Saturday, 16 April 2011 as a day to soak in some of the best East Indian culture has to offer. The Mobai Gaothan Panchayat (MGP) is organising the East Indian Exhibition – the first of its kind to be held in Mumbai – with the theme, ‘Amhi Mobaikar‘.

The exhibition commemorates a community regarded as one of the original occupants of the city and promises artifacts, photographs, articles, cuisine and information on the rich culture and tradition of the East Indian people.

A must-visit event for East Indians in the city curious about their roots and traditions, I strongly recommend other communities have a look-see about a culture steeped in Old Bombay and the group of islands once known as just Salsette-Bassein.

Don’t forget to bring your cameras and questions!

My grandma (second from left) with her sister and friends

* Various artefacts used by East Indians will be on display *

* Pictures will be used with descriptions on their specialty *

* Families who donate East Indian artefacts will have their family name tagged on them. These articles will then be permanently displayed at the special East Indian Exhibition space at Mobai Bhavan, Manori *

Search this blog for anything you want. You may not always get it, but hey…